This month we return to the UK and feature Mike Baldwin from Milton Keynes. Mike is a Gospel songwriter and performer. He has just released his first album “Go and Tell” on Amazon.

Mike also plays bass in a rock covers pub band called Murphy’s Law – not to be confused with the American hardcore punk band from New York!

You can get the chord sheets for Mike’s songs in Power Music format (free) from our store https://powermusicbox.com/Music-Store/Free-Songbooks 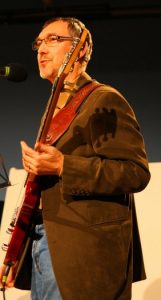 I’ve used Power Music Professional for a couple of years now having bought the package after a Mission Worship event in Eastbourne. I have a single licence, foot controller (which is indispensable!!) and it forms a central part of my worship leading.

I don’t attend a single church like most Christians, rather I support a number of churches in Milton Keynes either by leading worship or helping to develop worship teams. Consequently I have met a large number of worship leaders, singers and musicians all of whom I’ve roped into various musical projects at some stage.

When I’m leading worship I have my playlists all prepared on my tablet (transferred from my laptop via USB or My Music Box) which I attach to my mic stand… my foot pedal allows me to flip between songs particularly when one song leads straight into another and back again which I often do e.g. ‘Holy Holy is the Lord God Almighty’ / ‘Open the Eyes of my Heart’…’Trading my Sorrows’ / ‘My Redeemer Lives’…’You shall go out with Joy’ / ‘Jubilate Deo’. However I can often only do this by changing the key of one of the songs so they flow and this, of course is simple with PMP. This feature is also necessary when playing something that’s written for piano and the piano player always plays in Eb rather than E (“because it’s easier”) or when the singer requests a change. 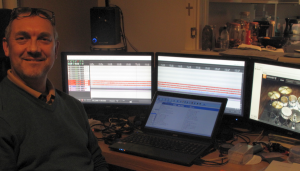 Recently I’ve used PMP to help write and record songs for a debut album which is now on Amazon – ‘Go and Tell’. I wrote the basic structure then tweaked and edited, tried different keys until I was happy then saved the album as a playlist. One of the songs – ‘See Me Now’ – was written about some of our homeless clients on a soup run we do who have died (some on the streets). The basis of the song is that their lives on earth might not have amounted to much but we should ‘see them now’ in rooms of gold with our Lord. I’ve created a music video on You Tube (Open Door Little Tony) with all the proceeds of the download going to Open Door MK which is a local charity supporting the homeless and vulnerably housed. Testament also has a Facebook page – Testamentmk – and I’d love to hear from any other PMP users. 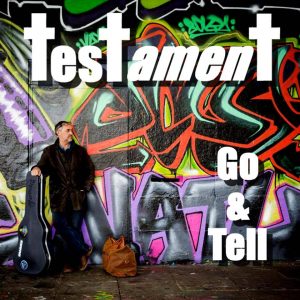 Power Music Professional is now such an integral part of what I do… I take it everywhere. It’s clear simple and just works as I need it to. Great piece of kit. Completely sold on it.