This month we are crossing the Atlantic to meet Scott Schreiber from Gilbert, Arizona. Scott’s story is inspiring and shows the power of music – how grabbing your instrument and getting out there and gigging keeps the fun in your life! 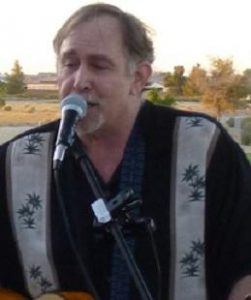 I was an acoustic musician in High school and college. I play and sang folk rock with a partner at small coffee houses in Isla Vista California to help pay my way through school. After graduation I focused on my career and did not play music for many years. In my early 40’s I became very ill and was not expected to survive. When I finally did have a surgery that saved my life, my vocal cords where damaged in the process and I also suffered neurological damage which limited my ability to play guitar. So I put my one acoustic guitar under the bed and did not pull it out for 15 years. A couple of years ago a friend was playing guitar and I told him I used to play. He asked me why I don’t play and sing anymore. I explained to him, but he convinced me to try. I didn’t play or sing well, but I had forgotten how much I enjoyed playing. 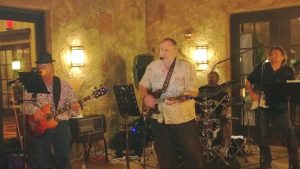 So, I pulled my guitar out from under my bed and decided to put the effort in and see if I could get my voice and playing skills back. After a year and a lot of work, I was able to sing and play again. It took another year before I was willing to go public. That was when I purchased my first electric guitar and decided I wanted to try classic rock. I put together and band and with a lot of work, am now playing out between one and 3 times a week in 55+ communities and having a ball doing it.

Because of my health issues I still have to take two prescription Naproxen to play music, but, when I am on the stage, I feel no pain. Because of ongoing issues with my health, sometimes concentration is difficult, I could not focus as well, if I did not have my Tablet with Power Music on the stage with me. 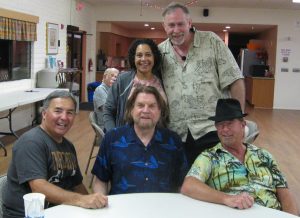 I am a huge fan of your software. Outside of our actual instruments, Power Music has been one of the most important tools we have added to our band. When we get a request, we all can get to it quickly and all have the same version. It makes us look a lot more professional and keeps our gigs from coming to a standstill while we search for a song. The MP3 launcher is also a great tool, I record all of our songs and can play them back during practice so we are always on the same page when rehearsing our songs. It also comes in handy for special effects that we can’t create as a four piece band. When we take our break, I have music loaded on the pad and just have to hit the MP3 launch and our background music is running. No more fumbling with a separate device to launch our break music. You have an incredibly well thought out tool and I can’t imagine going on stage without it. Again, thank you for a great product and excellent support.