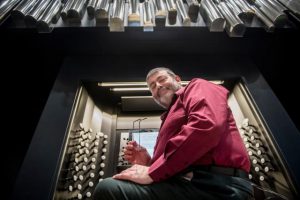 On February 10th, the University of Iowa Organ Department hosted an amazing feat of organ playing by Kevin Bowyer of Glasgow University. Kevin played the entire Sorabji’s Second Organ Symphony as the inaugural performance on the university’s new Klais organ. Kevin played using Power Music from Cambron Software and said afterwards – “Power Music performed flawlessly throughout, as I knew it would.” 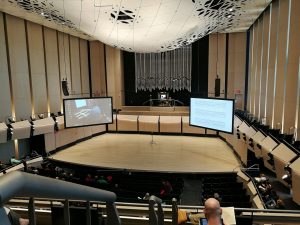 It’s now more than a week since my most recent encounter with Sorabji’s Second Organ Symphony, on the splendid new Klais organ in the University of Iowa. I’m still in the process of waking up from that performance, having put many months into its preparation. I’d like to say how grateful I am for the support of Greg Hand and the staff at the University who helped make the event the amazing success that it seems to have been. 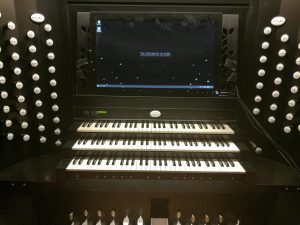 Shortcomings in the playing aside, the organisation was flawless and thorough, and I’ve been overwhelmed with the warmth and messages of support I received, both on the day and since, from the thousand-plus people who heard all or part of it (I believe more than 400 were present throughout). The guest book that was given to me after the concert had nearly fifty pages filled with names and comments (all were positive).

In the months running up to that day I was consumed with anxiety and depression and had thought that this would be my last meeting with the work. However, it is clear that the transformative power of this music is as great to others now as I have found it be for over three decades. It seems unlikely that any other player will ever perform the piece complete (I dearly hope that I am wrong in this), so my work must continue. Perhaps I’ll find a rehearsal regime that will minimise the angst of performance.

To all the many people who aided the event in Iowa, including all the staff and technicians, Greg’s family, including Linda and Patricia, for hospitality and support, to Oleg Timofeyev, Dima Lavr and Sabine Golz, to Andrew Mead, and to the many who have sent messages – you have my grateful thanks. This music is yours as well as mine.

Some Facts and Figures 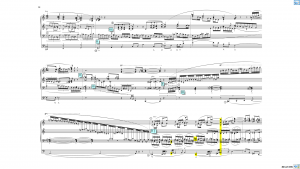 The piece was stored in Power Music in 3 sections – 114, 316 and 161 pages. Performance time was almost 8.5 hours with only 2 breaks. Page turning was done by an assistant sitting beside Kevin pressing one of our USB buttons. Kevin annotated almost every page, see example (click to enlarge):

For more information on this event follow one of these links: